Thursday's Children - Inspired by a Princess

Before I started writing and editing full time, I did daycare.

Out of my home.

Because I wanted to stay home with my own kids

And also, I am insane.

Actually, no - well, not completely, anyway. I really enjoy kids. However, I will say that potty training four kids at once is no one's idea of a good time. But there were parts of the job I adored. Like when any of the kids would grab a book, plop in my lap and say, "I need a story."

It was rarely, "Read me a story," but almost always, "I need a story." I loved that. Mostly, because I often feel like I need a story. I need that break from the rest of my day, that little escape.

To this day, I can still recite all of Where the Wild Things Are, most (early) Sandra Boynton books, Green Eggs and Ham, Princess Smartypants, Drac and the Gremlin, Pandora and The Paper Bag Princess.

The Paper Bag Princess, by Robert Munsch, was always a favorite around here. I read it several times a day. When my kids and the daycare kids were in school and I'd volunteer in their classes, this was almost always on the reading list. I'm still inspired by it today. 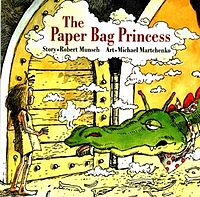 If you're not familiar with this little gem, it opens with Elizabeth - a beautiful princess who lived in a castle, had "expensive princess clothes" and was going to marry a prince named Ronald. Unfortunately a dragon smashed her castle, burned everything, including her clothes, and carried off prince Ronald. (I'm paraphrasing here, but you get the idea.)

Elizabeth, being a kickass heroine decides to chase the dragon to get Ronald back, and the only she can find that isn't burnt is a paper bag. So covered in soot, wearing a brown paper grocery bag and her bent crown, she goes off to rescue her prince. Appealing to the dragon's vanity, she manages to trick the dragon into using all of his fiery breath and then exhausts him to point where he can no longer move. Elizabeth steps over him, and rescues Ronald. 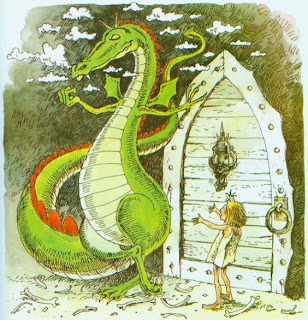 As it turns out, Ronald is pretty much an asshat. He complains that she smells like ashes, her hair is all tangled and she's wearing a dirty, old paper bag. He tells her to come back when she's dressed like a real princess.

The last page of the book goes like this:

"Ronald," said Elizabeth, "your clothes are really pretty and your hair is very neat. You look like a real prince, but you are a bum." They didn't get married after all. 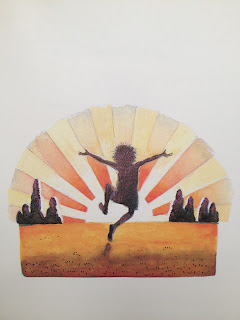 Like I said, this book inspires me. In 24 pages (12 of  them full page pictures) Munsch gives us a character who is willing to fight the dragon, who manages to out-think the dragon and who rescues the person she loves. Only when she discovers that he's not the person she thought he was, she's outta there. She has the strength of character to walk away. She's strong, brave, smart and most of all, she's true to herself and has enough self worth to remove herself from a situation where she's not valued for who she is.

Posted by Chris Allen-Riley at 6:50 PM