I think I was tweeting with Rhiann and Kate when I said that I'd blog about nun stories, well, gather round dear readers. Today is that day. And I promise - it does have an Thursday's Children inspiration-type slant. But, I'm getting to that.

When I started my freshman year of high school, it was at a Catholic school. Having been to five public schools prior to high school, I had no idea what was in store for me. The only nun I'd ever met was the aging hippie who played guitar at the church my parents had taken me to.

The nuns at my new school were a surprise. Most wore habits - involving black and white coifs and veils and dresses and skirts in varying shades of blue or brown polyester depending on what order they belonged to. There was also Sister Michael Ellen aka The White Nun or the Library Nun who wore one of those giant,  old school, white multilayered numbers.

Because of her particular habit, I was always a little afraid of her. She looked incredibly intimidating - not to mention mean, especially when she was walking quickly through the halls, her clothes billowing and her gianormous wooden rosary swinging wildly from her waist.

It didn't help that it seemed she was always ordering the AV nun, Sister Mary Projector, (not her real name) around. Sister Mary Projector (I'm not sure if anyone actually knew her real name) was on an endless quest to deliver the filmstrip projector on the cart with the super squeaky wheel. But mostly, she just wandered up and down the halls never reaching her destination.

Then there was Sister Rosine. At first, I thought she was just a sweet, little old lady. That was cleared up within the first five minutes of religion class when we were all seated alphabetically - except for the non-Catholics. They had to sit in the back of the room, because they were "going to hell, anyway." There was also the day that she went on a tear about the color red. As far as she was concerned, it was a color reserved for Satanists and whores. Unfortunately, that was the day I'd chosen to wear a red sweater and had painted my nails bright read to match. So had my friend. We had to stand up and announce that we were "Brides of Satan." Yeah. I know. It was insane.

And lastly, there was Sister Clarine - the biology nun - think white lab coat over a baby blue polyester dress and the most sensible of sensible shoes. The first time I saw her, she was standing outside the door to her room with a clipboard. The second time I saw her, she was draped with two, seven-foot boa constrictors. I promise you, there are fewer things more disconcerting  than a sweet faced, little old lady wearing a a veil and covered in snakes.

While there were more nuns (and definitely more stories), these are the ones that pertain to this post. In every instance I had a preconceived notion about who these people were and how they'd act.

I thought Sister Rosine would we sweet and kind. She was pretty much evil.

I thought Sister Michael Ellen was mean. While I might have been right about my theory about her wanting Sister Mary Projector out of the library, it turns out I was wrong about the rest. Despite her often terrifying appearance, she was really quite sweet.

And the Snake Nun?  Let me just say that woman loved her reptiles. And she was honestly the last thing I ever expected see in a Catholic school.

What do the nuns have to do with inspiration? Well, let me tell you. Because they were, well, nuns - and because of their appearances, I had a certain set of expectations about them. I know - totally shallow - but in my defense I was only fourteen.

The same thing frequently happens in books. We very often see wonderfully fleshed out main characters and even secondary characters, but incidental characters sometimes fall prey to stereotyping or character shorthand. Jocks are bullies, romantic rivals for our heroines are sluts or bitches...or both, bosses are lecherous and greedy. And nuns? Well, they're pious and strict.

Those nuns taught me a lot. Although, I suspect most of it wasn't intentional and certainly wasn't part of their curriculum. But they taught me that even characters who are more plot device and filler than actual characters still need to be more than stereotypes. They taught me to look beyond expected conventions of genre and not to use character shorthand. They also taught me that sometimes nuns are badass enough to have pet snakes. 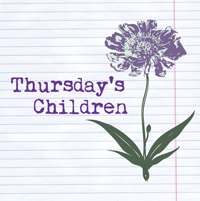 If you'd like to be part of the Thursday's Children's blog hop, here's the code! Please check out the awesome authors and all their inspiration!
<!-- start LinkyTools script -->
<script src="http://www.linkytools.com/basic_linky_include.aspx?id=185777" type="text/javascript"></script>
<!-- end LinkyTools script -->
Posted by Chris Allen-Riley at 7:51 PM