Last weekend, I was able to participate in the March Against Monsanto with my mom and my oldest son. After the march there was a drum circle, and I love me some drum circles. My son, who drums incessantly to any rhythm playing, decided that he'd like to come along too. We had a blast.

If anyone is unfamiliar with the idea of a drum circle, it's basically a bunch of people coming together to hang out for an hour or two and play hand drums and other percussion instruments.

It's also much more than that.

Other than my son, I only knew one other person in the group, but we plopped ourselves on the grass with about ten or twelve strangers and formed a circle. The woman facilitating the gathering suggested we all start together with a two tap heartbeat pattern. We all played together for a few minutes and then things started to change.

Here and there, people started to change things up. New rhythms evolved. Everyone was doing something a little different, but it all worked perfectly to complement the whole sound. There were five or six little kids running in and out of the group - occasionally picking up an instrument and playing with it or more often, just dancing around. It might sound a little chaotic, and really, it kind of was. But it was also really cool watching and listening to everything evolving organically to create this wonderful whole that couldn't possibly be duplicated.

In a way, it's like communicating through sound. Each person's rhythm changes to answer another person's. Sometimes, it's complementary. Sometimes it contrasts sharply. Just like actualy conversations.

As I sat there drumming, I realized something important - drumming in a circle of people - especially mostly strangers - is a lot like writing. Or, at least, it's a lot like my writing process. I typically start out a story with one, really solid idea or beat. And as I write and new characters and plot threads revel themselves. Sometimes they're complementary and sometimes not so much. But as I write, the rhythm of the story changes, growing fuller and more complex until I've got this organic whole that I created by listening to the beat of the story and characters.

In case anyone is wondering what a drum circle looks like, here are a few pictures and one of the drum I made. 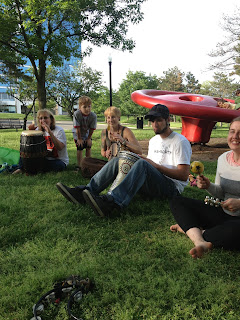 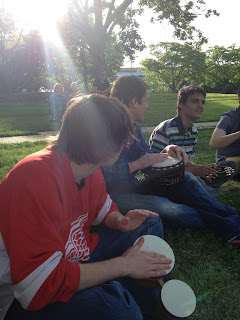 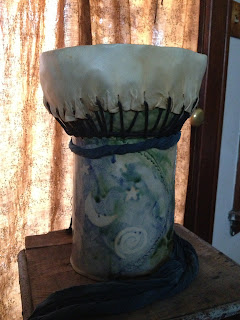 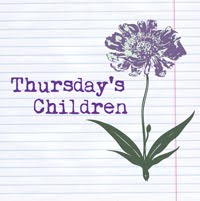 Here's the linky code if you'd like to participate in the Thursday's Children Blog Hop - Tell us what inspires you!