Since returning from my conference last month, I've been walking everyday - 2 to 3 miles a day depending on the weather and how much time I have. I have to admit, I'm not one of those people who likes to exercise Sweating, in no way, appeals to me, and frankly, I'm much more into lounging. However, I'm now walking. Every. Day.

I'm almost sort of enjoying it. Like many other Thursday's Children have mentioned, walking is inspirational. While I'm trudging through the neighborhood, I see all sorts of things that inspire me. 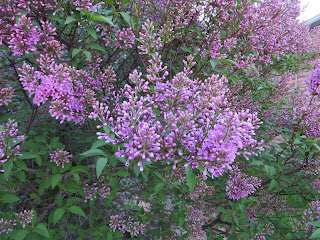 The pug who purposely blocks my way until I agree to pet him.Once I pet him, he moves.
The color of bluebells as they graduate from a twilight blue to velvet white.
The little smiley face stickers that someone placed on the sidewalk on Tamarack Street once yellow and now faded to almost white.
The insanely sweet scent of lilacs and peonies.
The band of rabid terriers that throw themselves against their gate, desperate to attack me.
The orange and white cat that insists that I pick him up and carry it from one end of the block to the other.
The squirrel with the compulsive eating disorder.
The little girl on Jennette Street who sits and pouts on her front stoop every morning before finally schlumphing off to school.
Even the mom who screams nonstop at her 3 little kids while she walks them to the crossing guard. (Though, I won't tell you what she inspires me to do...)

I've had to walk on the treadmill a couple of times because of thunderstorms. I hate it. I don't feel inspired at all. I just feel crabby. I know that for a few miles, I should be able to rely on my one brain to entertain and inspire me, but there's nothing. Just the utter loathing of the treadmill with its flashing lights and numbers.

Physically, the treadmill is probably doing an equal amount of good compared to my outside walks, but emotionally and inspiration-ally, I apparently need fresh air and the sights and sounds of the neighborhood. When I get home from my walks, I"m always ready to write even if nothing I've encountered makes its way into my manuscripts.

Posted by Chris Allen-Riley at 8:26 AM