I've been fascinated with Arthurian lore since I was a kid - probably because in addition to Winnie the Pooh and fairy tales, my mom would also tell us stories about King Arthur.

When I was in college, I stumbled across The Chalice Well. Well, not literally. But in some research I was doing for a paper for a Medieval Lit class. I was instantly fascinated - from the wood and wrought iron well cover to the history - actual and literary. 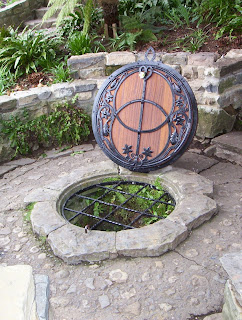 As near as archeologists can figure, it's been in constant use for over 2000 years. The spring produces 25,000 gallons of water a day and it's believed to possess healing qualities. The well has long been associated with goddess worship and there are also connections to Christianity. Supposedly the well is the final resting place of the Holy Grail. And in Arthurian tradition, Excalibur (and according to some) Arthur and Guinevere are buried nearby. 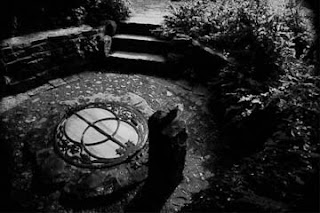 The well is also considered a gateway to the spirit world as symbolized by the overlapping circles of the Vesica Piscis on the cover.  It represents the connection of the spiritual and the physical, the magic and the mundane and to me it symbolizes the interconnectedness of everything.

I can't write in the vacuum of only my own head. I need the interconnectedness of life and imagination, and this symbol always reminds me that everything affects everything else.