I can't remember a time that I wasn't fascinated with rocks - the little ones I put in my pocket, the bigger ones in my garden and on most flat surfaces in my house and the huge monoliths that make up stone circles. It's largely accepted that many of the formations were used as elaborate calendar systems and/or burial grounds. But there is some evidence that some of them may have been used for navigational purposes.

While researching my WIP, I discovered that there's even a recently (well, 1988, so somewhat recent) discovery of a stone circle on Beaver Island (the largest island in Lake Michigan) that suggests that not only was this structure used by the native Ojibwa tribe, it also may have been used by the Celts.

In this pre-Columbian circle which is roughly 400 feet in diameter, there are carvings in many of the stones.  Most of them are eerily similar in nature to early druidic carvings found in rocks in Ireland and Great Britain. However, there are also other markings that indicate an agricultural calendar of sorts. And still more that appear to be solely navigational.

I think the most fascinating on is the relief map of Michigan and the five Great Lakes. The carving is even more evident when it rains and the "lakes" fill with water. Unfortunately, I haven't been able to find a shot of that. But I'm stunned by the idea of someone carving such an accurate map without the benefit of an aerial view. 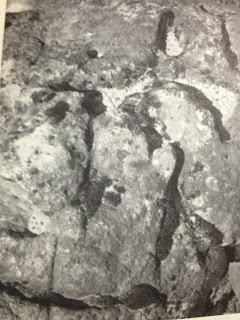 There are some historians and archeologists that are suggesting that it's possible that some of the very early, nomadic Celts ended up here via the Atlantic Ocean and via the waterways of Canada and into the Great Lakes - with the result being a melded culture with the Ojibwa. It hasn't been proven, of course, and there may be other explanations for it, but the possibilities are totally inspiring me. 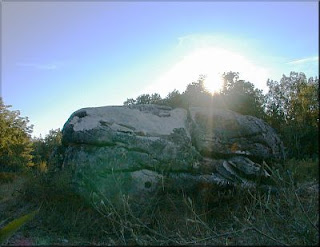 I'm hoping to get out to Beaver Island soon and see the circle for myself, but for now, I'm just gonna keep working on the book.

Posted by Chris Allen-Riley at 3:30 PM